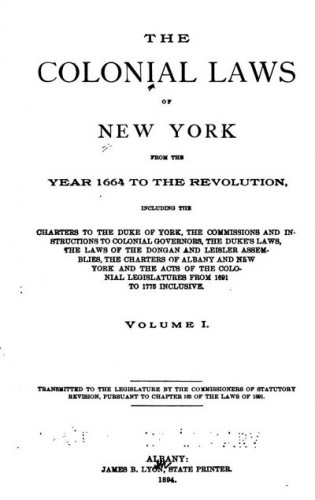 Larceny, in modern legal systems, is treated as a crime but it wasn’t always this way.  In ancient Rome, larceny was initially treated as a civil matter in which the victim would sue for damages equal to what was stolen.  Eventually, the Romans adopted criminal proceedings for certain larcenies but only in serious cases and the punishment was death, banishment, or forced labor.   In thirteenth century England, Henry de Bracton wrote “On the Laws and Customs of England” which based criminalization of larceny on Roman law.  Bracton based larceny on Roman law but omitted motive as an independent element because an intent to deprive the owner of his/her property permanently was incorporated into the definition.  New York’s earliest laws on larceny are difficult to discern.  New York was originally New Netherlands, a Dutch colony founded in 1613 and controlled by the West India Company.  Criminal matters were dealt with by the charter of 1629 which applied to capital crimes and other immoralities but lacked the specificity of today’s criminal law.  Although the charter of 1629 was the first attempt to identify and define prohibited acts in New York, it wasn’t until 1694 that an attempt was made to officially publish it.

The availability of a written criminal law is something we take for granted today but during the colonial period, it would have been difficult or impossible to obtain a copy of the law.  Most prosecutions, including for larcenies, relied on interpretations of natural law and/or case law.  Natural law is, basically, whatever the local justice thought the law should have been.  This could have been based on the local justice’s personal religious beliefs or superstitions.  Common law was the better alternative to natural law because it is more consistent.  The common law is law that has been developed over time through judicial precedent so whether you broke the law and what the consequences should be are determined on a case by case basis by looking at older cases.  Under the common law, a larceny was defined as a taking of another’s property with the intent to deprive the rightful owner of the property permanently.  This required an actual taking of property, even if for a moment, with the simultaneous intent to never return the property.  This intention to deprive permanently, or evil intention, is an element which means that an accidental or unintentional theft is not a crime.  While the common law is still good law in many different areas today, criminal law is generally controlled by statutes that specifically lay out what constitutes a crime. 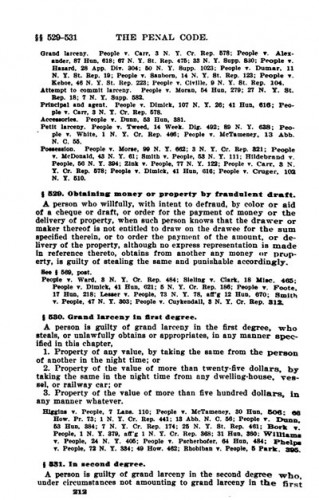 In 1796, The Colonial Laws of New York were replaced with the Laws of New York and in it, the legislature drafted the first official larceny statute:  “If a finder of goods take them away with the intention of converting them to his own use, and only restore them because a reward is offered, he is guilty of larceny.”  There was no distinction between grand and petit larceny but this soon changed.  The vast majority of property crimes in the early 1800’s consisted of larcenies and after 1820 a distinction between grand or petit larceny was made based on the value of the property.  (McConville & Mirsky, 23).  In 1881, grand larceny was codified for the first time in New York as grand larceny in the first and second degree in the first edition of the penal code.

Some of the triggering circumstances have changed but the basic definition of larceny under New York law didn’t change that much over time and is similar to the definition under the common law.  Grand larceny can’t happen unless there is a larceny.  A larceny is defined as the wrongful taking, obtaining, or withholding of another’s property with the intent to deprive the other person of such property.  The difference between larceny and robbery is the threat or use of force associated with a robbery.  Larceny is a non-violent taking.  A larceny can be committed in several ways including conversion, embezzlement, false promise, false pretenses, acquiring lost property, and extortion.  Conversion is the most commonly thought of form of larceny.  Conversion is the taking or stealing of property from the rightful owner.  When a person takes clothes from a store, they are committing a larceny by taking or conversion.